This is a “remake” from my previous guide and maybe I have missed something which is not properly updated.

VMware Explore 2022 Europe is just a few weeks away and I am extremely excited because it means the first event that I am going to attend this year! (after not being able to attend Kubecon in Valencia…).

This event is a bit special for me because it’s where I started to meet many people I know nowadays, so I am looking forward to meet most of them there!

As mentioned before, this is a "remake" of my previous guide with tips about transport, restaurants, places to go, etc. I am trying to update as much as I can but also I won't extend as much as I did in my 2019 guide.

The event will take place from the 7th (Monday) to the 10th (Thursday) of November at Fira Gran Via in Barcelona, Spain.

Also, it is a great way to connect with a lot of people from the community, vendors, or other persons that you could be interested in (try not to be aggressive when approaching them).

People are really friendly so, don’t be shy (you can try first on Twitter) and try speaking to members from the vCommunity (if you don’t know what it is just search for #vCommunity on Twitter!) for example.

Besides, be sure to meet the vBrownbag crew (which I am part of) in the Tech talks area, so feel free to go there and say “Hi!” :)

My friend Fred Hofer has this handy resource where you can find all sort of parties and gatherings!

In Spain, tipping is entirely optional and its not very common so, it’s up to you if you want to leave a tip in case the service was exceptional or you think it deserves it.

In restaurants, shops, etc. the VAT tax is included. Therefore, you don’t have to worry to calculate an extra amount of money.

The official language in Barcelona is Spanish but most of the population speaks Catalan. Be ready to don’t understand some signboards from the street or public places.

Renfe and TMB are the most used because they have more combinations than the FGC and also better schedules.

Then, you will see in this guide mentioning “train” for Renfe (the company) and metro/subway/underground for TMB.

Masks are mandatory when using any public transport.

Coming from the airport#

Once you have landed at “El Prat” airport, there are a few ways to go to the city of Barcelona:

Putting the hand luggage on the taxi trunk costs an additional euro. One of the services available is FreeNow or Cabify as Uber is not available in Barcelona.

You can go to the Aeroport (airport) stop on the R2 Nord line (you must go to Terminal 2 to take the train). This line will take you to Sants-Estacio and will be great for people staying near Sants.

This line is less frequent than the next option but it takes less time. Pricing is subject to zones. In that case, From Aeroport to Sants-Estacio the price for a single ticket will be 4.60 €.

Use the L9 Sud line, this is the Metro (subway/underground) service and can be combined with other lines (like L5 at Collblanc stop for example) within the same ticket.

This service is more frequent than the train service. This can be the best option for most people because you can use the same single ticket to go to other places by combining lines.

The least recommended option as it will be crowded but it depends on your preferences and where you want to go.

The Aerobus service will take you to «Plaça Catalunya» (Catalunya Plaza) but it costs a bit more than other services (still 5,90 € in 2022), you can review more information here.

The Metro (subway/underground) is your best choice wherever you stay in Barcelona. If you want a cheap, frequent and “reliable” service within the whole city.

Before, there was a ticket (with 10 single rides) that could be used for more than one person, nowadays that ticket (called T-casual) is completely individual and can’t be shared with other people. More information

With the metro, you can travel through lines at the same cost. The main stops to consider will be Fira in L9 Sud, Plaça Espanya in L1/L3 and, Sants-Estacio in L5/L3. 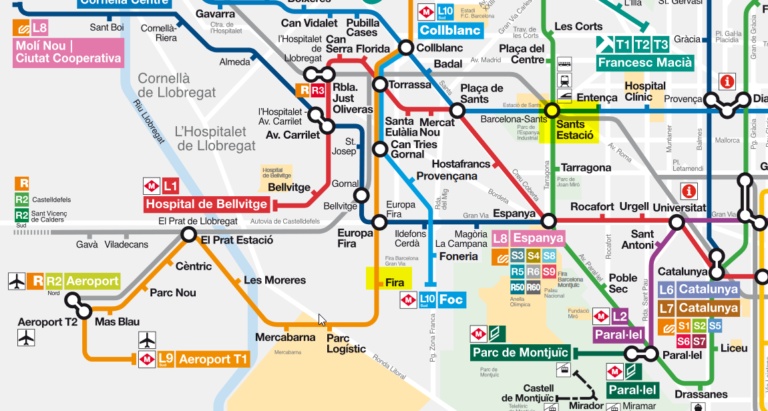 The fastest way to VMware Explore?#

The closest stop to the VMware Explore event is Fira in L9 Sud or the Europa-Fira stop which is another stop from the L9-Sud line that also combines with another train service which is a different transport service than the metro and it has different stops.

If you stay near the Sants area, the Sants-Estacio stop in L5 will be your choice. Then, at Sants-Estacio station take the L5 to Collblanc stop and after that, change the line to L9 Sud until you arrive at the Fira stop.

You can see in the following map the VMware Explore precinct highlighted in yellow and the closest stops (marked in Europa-Fira stop which combines FGC and Metro services and, Fira stop at L9 Sud. 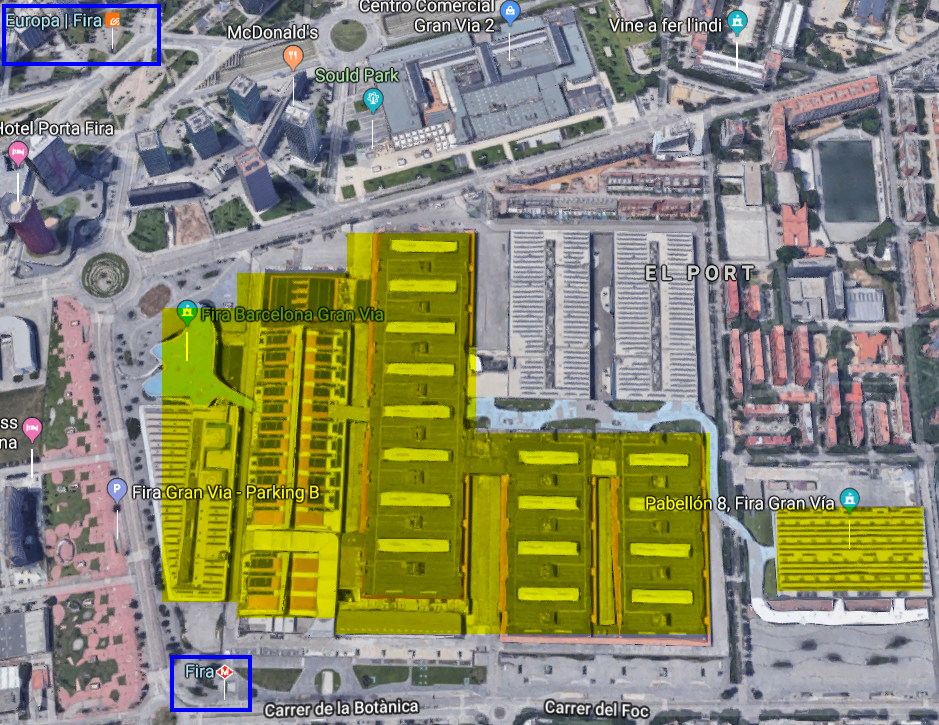 Here is a summary of famous places you could visit if you’re planning to visit Barcelona: 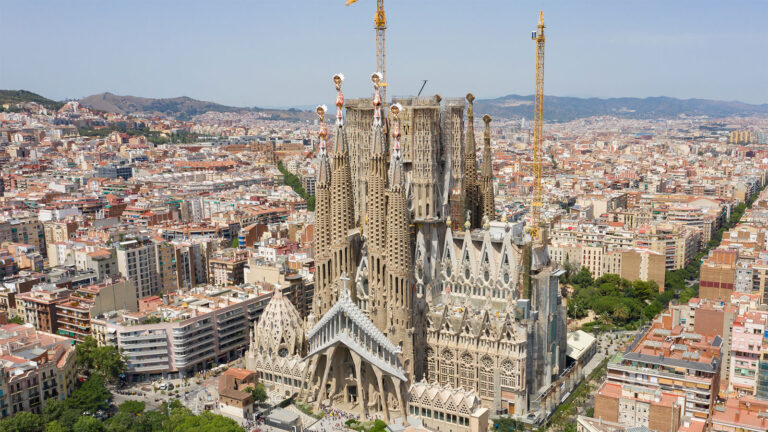 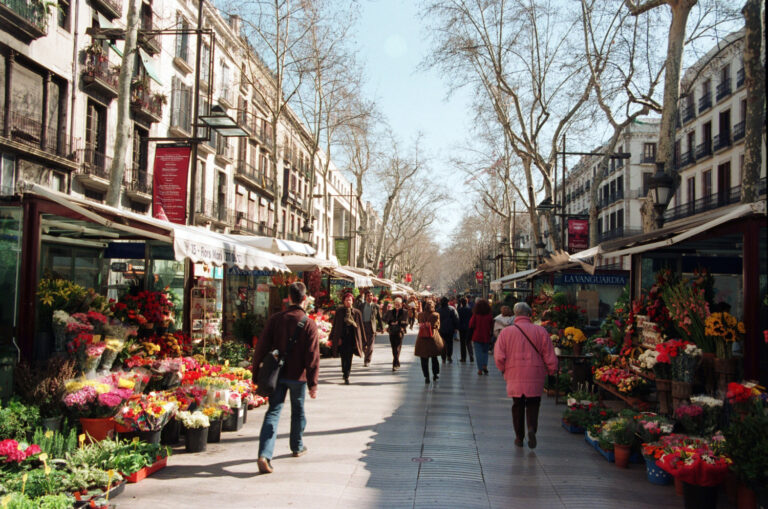 The most famous pedestrian street of Barcelona, you will see many kiosks and artists there while walking in the middle of the city.

Note: Keep an eye on your belongings if you are watching an exhibition as pickpockets are specialists in those areas. Other than that, enjoy this long street. 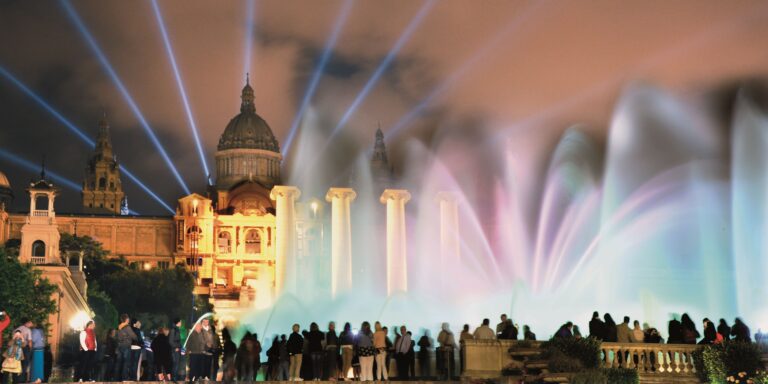 This fountain is stunning at night. You should check the exhibitions scheduled with lights, music and water streams creating shapes. 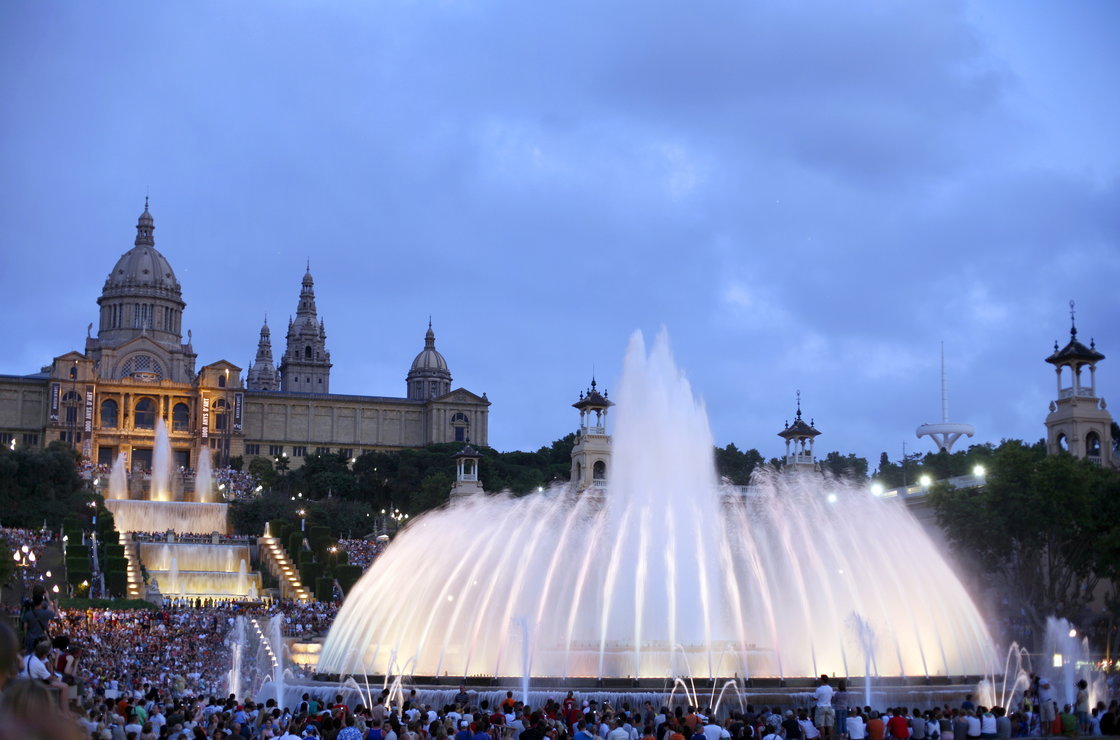 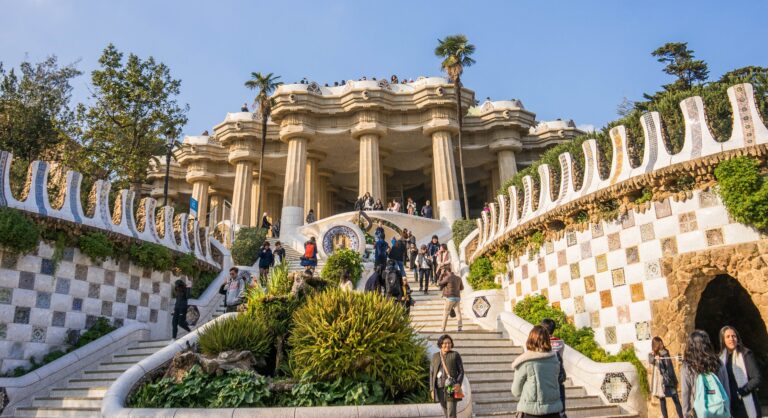 A gorgeous park with some designs from Gaudí and other architects that are interesting. You must buy a ticket in order to gain entrance to the Monumental Area (where you can see some monuments from Gaudí). 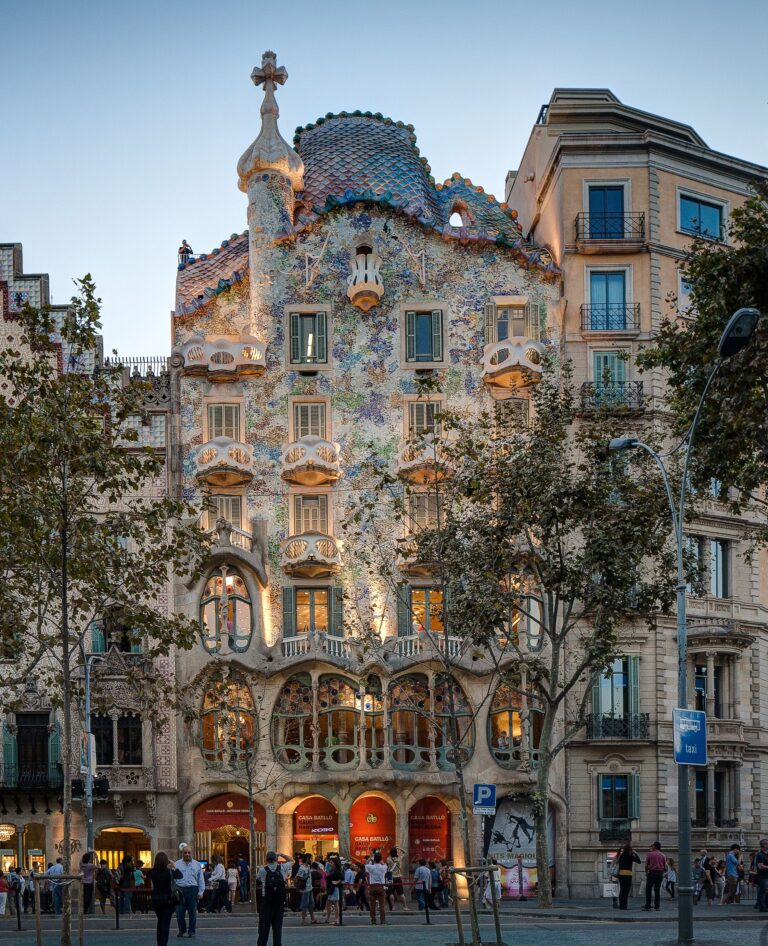 A famous building designed by Gaudí also named «House of bones». Look at the facade which is something that you probably never seen before with the sculpted stonework, the windows or the painting. 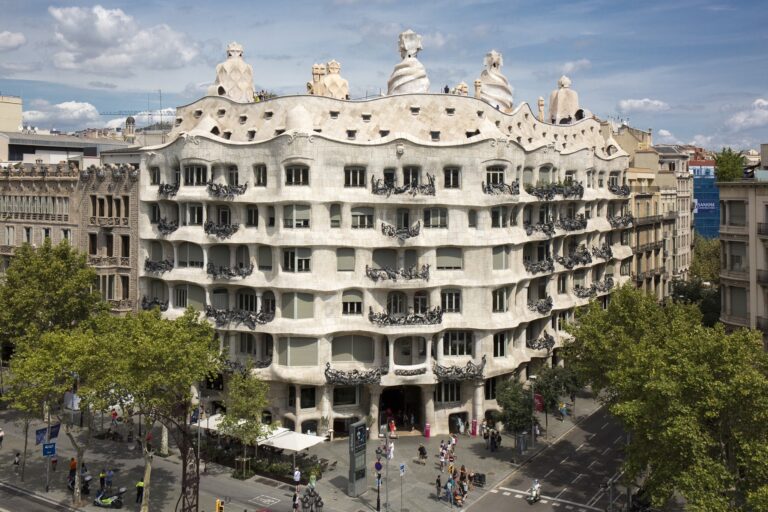 Another famous building designed by Gaudí. It has unique balconies and a courtyard that defines the style of Gaudí and also his last private residence. 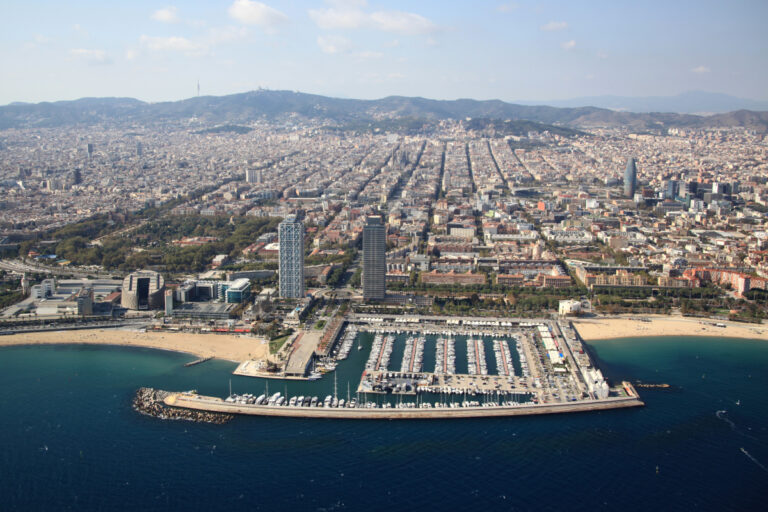 The Olympic port of Barcelona#

It is one of the most exciting leisure and touristic spots throughout Barcelona, with a wide offering of shops, clubs, and restaurants. It’s the gateway to the Barcelona beaches.

Also, avoid the neighborhood known as «La Mina» which is farther from Barcelona but it still accessible by Metro.

The food in Barcelona is…very nice (compared to other countries ;) ) and some of you probably know it.

In Gran Via 2 (a shopping center pretty close to Fira Gran via) I can suggest you:

The best places aren’t near Fira Gran Via but if you want to try better food, here are a couple of restaurants that are really nice:

Bacoa Burger Amazing and customized burgers, also hand-made fries and sauces. It’s a franchise but one of those which are extremely worth it.

König Great restaurant where you can try almost everything: tapas, amazing beer, flatbread, and many other options.

La Bella Napoli Not too many choices on the menu in this Italian restaurant but the food quality is amazing.

Takumi Ramen For me, one of the best ramen you can find, there are a couple in Barcelona, be sure to check them as they have different dishes depending on which one are you going.

Let me put a short section about local food here.

The food you must try while staying here would be: Paella, Spanish omelet, Bread with (spread) tomato and of course Ham (Jamón)!

Despite there many restaurants that they prepare all these dishes, I will avoid the ones in Las Ramblas because they’re usually not the best option…

Bread with (spread) tomato and olive oil can be found in almost any bar or restaurant so, just ask for it. They are also served at breakfast! 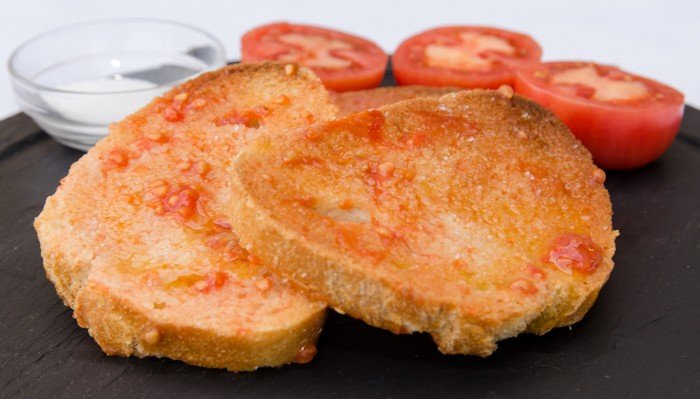 Also, on these dates, it is common for street vendors to sell hot toasted chestnuts wrapped in newspaper, give it a try! 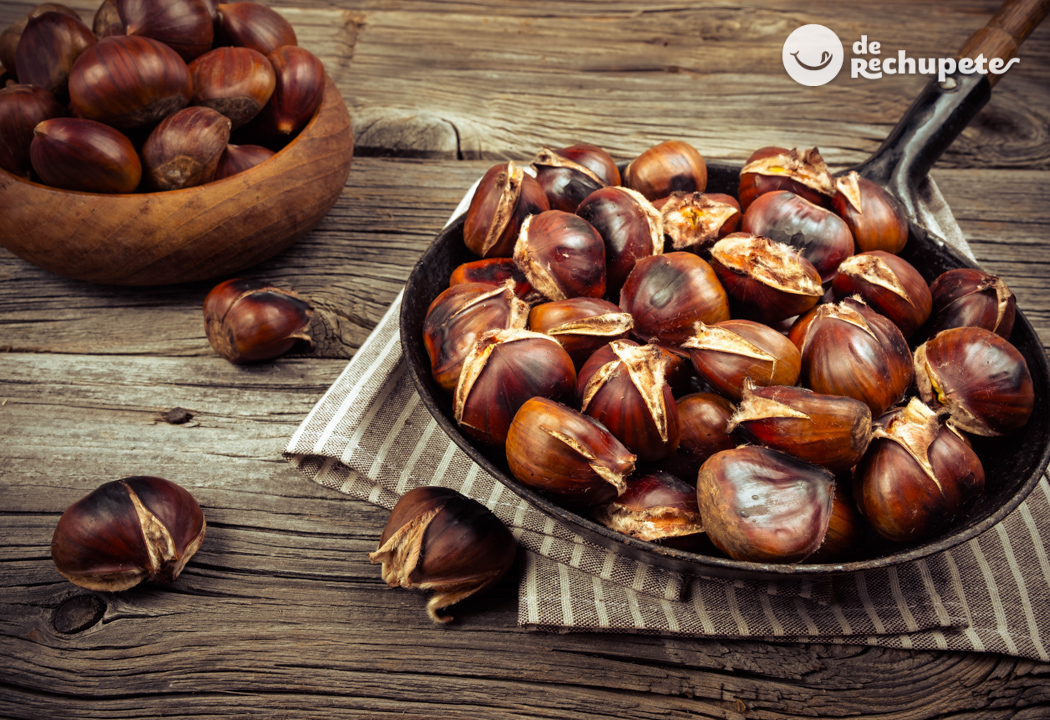 Finally, within this season, you should try a sweety called «panellets» (special almond balls covered in pine nuts), you can find them in bakeries: 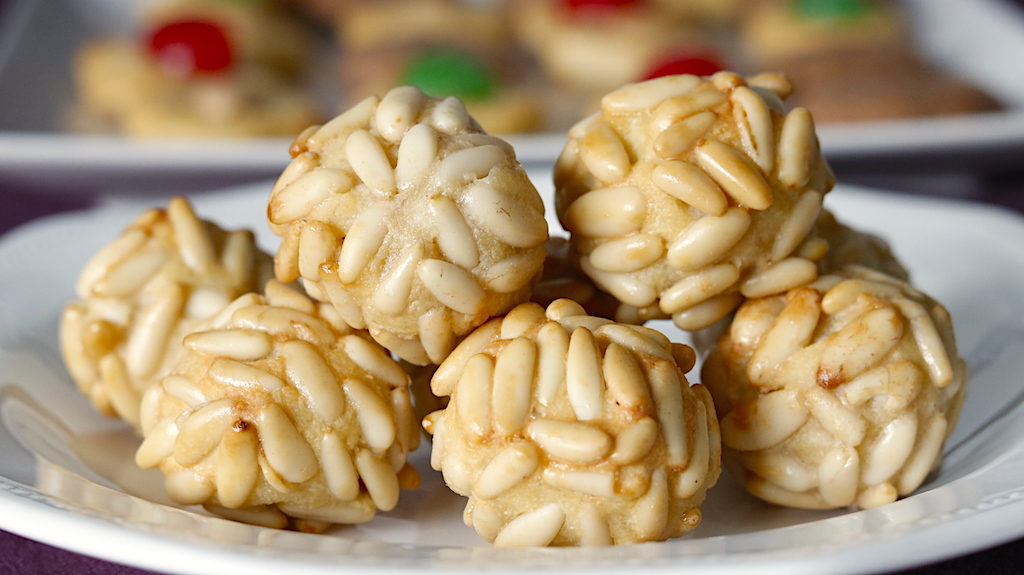 There are many other places and foods not included here. If you want something specific just let me know in the comments or DM on Twitter.

That will be a summary of things to do at VMware Explore and in the city of Barcelona.

Be sure to enjoy VMware Explore with all the events, parties, people and more things that can give you but overall, have fun!

If you think that something is missing, let me know.

See you at VMworld, sorry, I meant VMware Explore ;)