I will explain today how to migrate ADFS from 2012 R2 (3.0 v) to 2016 (4.0) without almost no downtime. The overall process consists in adding the new ADFS server to the farm, assign the primary role to the new ADFS, make some changes and then we’re done.

The current environment is:

A DNS A record that points sts.teselia.com to the ADFS IP address.

And the future environment will be:

Planning for your ADFS Migration#

Now, time to upgrade the schema of the AD:

Install the role of ADFS in your target server and then continue with the post-deployment config:

Provide your federation service name. You can review it in the current ADFS primary server and click Properties in the root folder of the ADFS console: 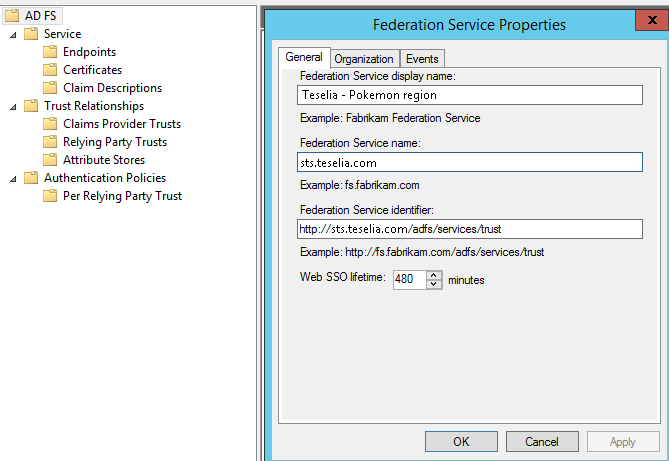 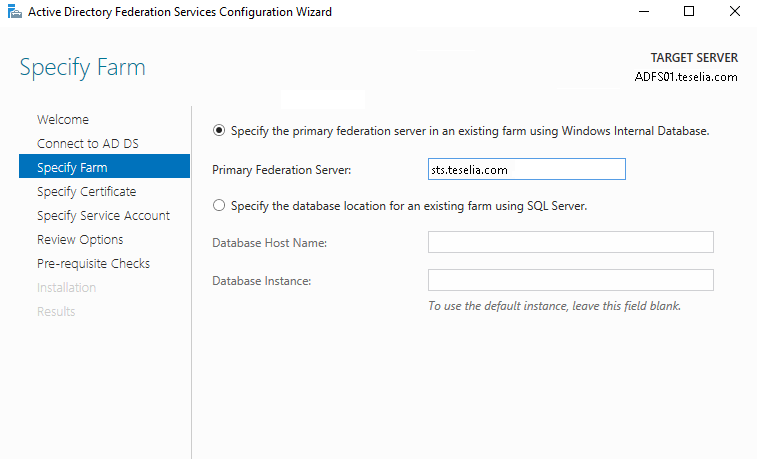 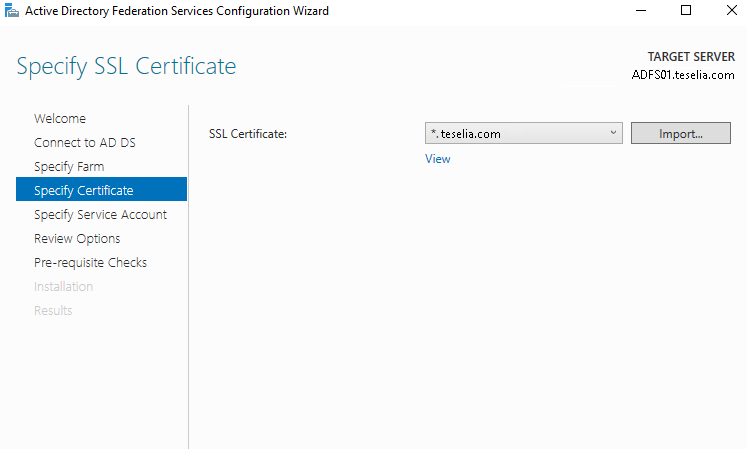 Review your configuration and after the pre-requisite checks proceed with the «Configure» button: 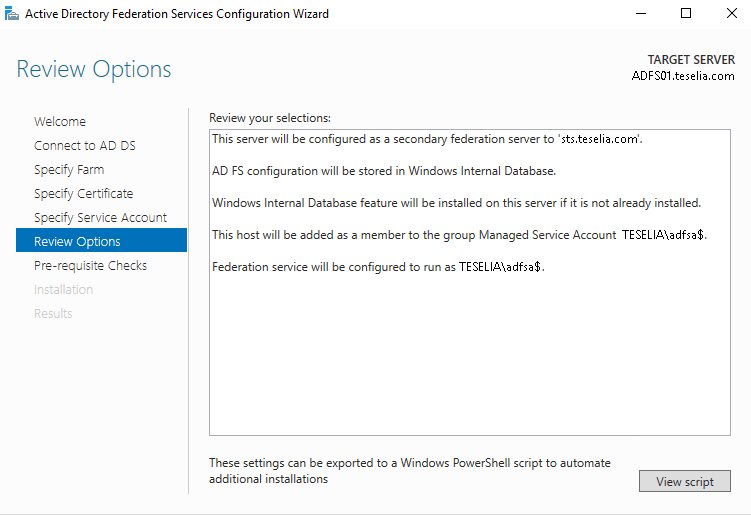 After the server is installed you will have some warnings that will be fixed later by rebooting the server and making this new server as the primary ADFS server in the farm: 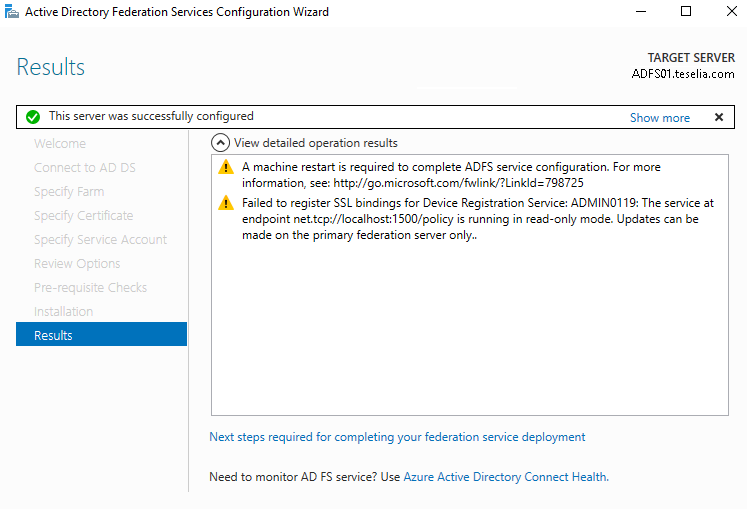 Then, we will proceed to reboot our server (ADFS01.teselia.com).

Configuring as a «PrimaryComputer» in the ADFS farm#

Once the machine has restarted, open the ADFS Management Console, and you’ll notice it’s not the primary federation server in the farm.

Open a PS console and execute:

After that, I can access the ADFS console from our new ADFS server without the warning: 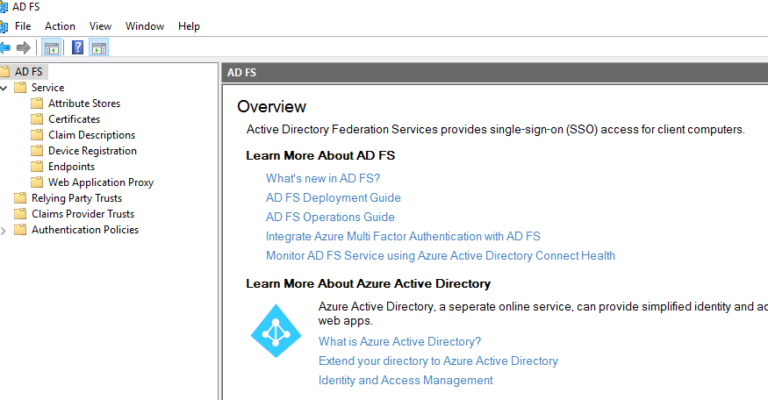 Execute this on the other ADFS servers (we will point the new ADFS server as the PRIMARY):

Then, we will check that in our old ADFS server it’s correct:

Details to bear in mind#

So, in my case, I have a DNS A record that points sts.teselia.com to an IP address (the ADFS server)

After pointing the new, I had to modify the hosts file from the WAP server in the DMZ to point to the new server!

Also, I modified the DNS  record from the internal DNS with the new server’s IP address. 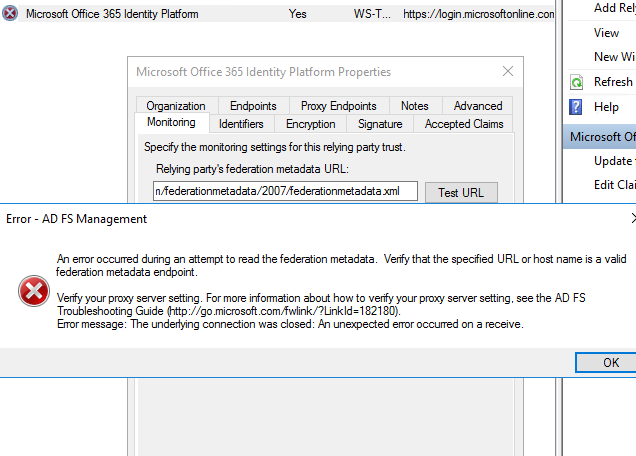 The solution was to apply a fix described by Microsoft:

Basically, what you have to do is to add a couple of registry values in this new ADFS server because it’s Windows Server 2016 and is running ADFS 4.0 version.

Once you applied the fix, reboot it and works flawlessly! 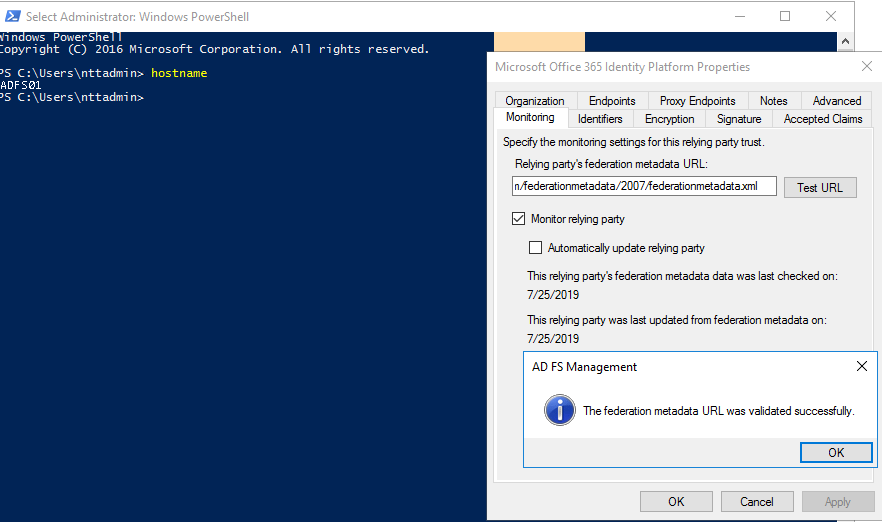 To check that it’s really working, try to log into your Office 365 portal and it must show you the portal from your federation service.

Once you tested that it works correctly, as both ADFS servers will have the configuration replicated, you can remove the role from the old one (that now holds the secondary role) and then remove it from the domain.

With that done, you will have a fresh new Windows Server 2016 ADFS server and none «old» ADFS servers.

And that’s all, I will do in the future another post about the WAP service migration that it’s easier than this one, I hope that this can help someone.